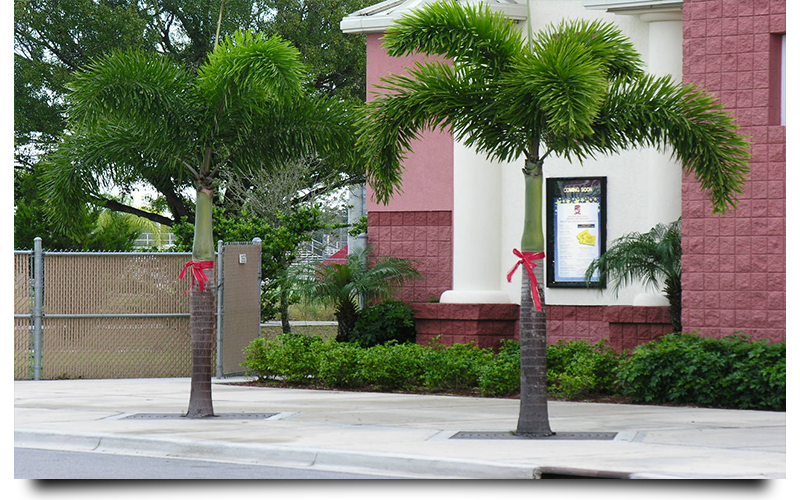 Foxtail palms have become a popular landscape plant due to their aesthetic qualities and relatively fast growth. With proper care and maintenance,they can be a great addition to the landscape.

Foxtail palms can tolerate shady conditions, but grow best in full sun. On average,they grow to about 30 feet tall. Foxtail palms can survive temperatures down to 30 °F, which makes them suitable for most areas of Florida.

Fertilizer: Nutrients must be managed carefully to prevent nutritional deficiencies. Once deficiencies occur, it may take several years to correct them.

Common Nutrient Deficiencies: The most common deficiencies observed on foxtail palms is potassium (K). To correct a K deficiency, broadcast a soil application of potassium sulfate at three to eight pounds per palm four times per year. Also, apply one-third as much controlled release magnesium sulfate to prevent a K-Mg imbalance.

Watering: Established palms require no additional irrigation especially if they are located in a lawn where turf grass is being irrigated.On average, a St. Augustine grass lawn should be irrigated one to two times per week (depending on rainfall and season) with 1/2” to 3/4” of water per application.Over watering a foxtail palm can lead to trunk splitting, nutritional deficiencies, and/or fungal diseases.

Pruning: Never remove green fronds from a palm. Palms store their excess nutrients in the lower fronds, so removing those fronds essentially starves the palm and leads to nutrient deficiencies.